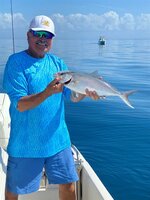 It is with deep sorrow and much love that we mourn the passing of James Douglas McGregor, on December 28th, 2021, in Englewood Florida at the age of 65 years. There was not a stranger in Jamie's life. He was the first to lend a helping hand, and to offer kind words. He was a true blessing in so many people's lives. Family and friends often referred to him as MacGyver because he could fix anything, or so he thought, and no one could tell him otherwise. He enjoyed life to the fullest, and made sure everyone around him was enjoying life as well, especially when he served them his famous wings and fries. Aside from his huge heart and the kindness he bestowed upon everyone in his life, Jamie also loved the outdoors, golfing, and boating in the ocean. While in Ontario, Jamie could be found on snowmobile trails, golfing at his favourite course, Rocky Crest, and spending time with his friends by the water. He was so happy during the time he spent in Englewood, Florida, boating and fishing in the gulf with the love of his life, Sherry. Jamie will be lovingly remembered and profoundly missed by his wife Sherry McGregor, his children: Ryan McGregor and his spouse Allison Beehoo, along with their children Hailey and James, his daughter Melissa McGregor, and his first wife, Karen McGregor. He is also mourned by his stepchildren: Megan Moore and her spouse Kris Moore, with their children Lorelai and Bryce, as well as Brittany Landau and her spouse Jordan Landau, along with their children Keira and Josie. Jamie's many extended family members and friends will remember him fondly and miss him very much. Jamie was predeceased by his loving parents, William and Patricia McGregor. He is survived by his brothers Mike and Rob, and his sister Carrie. A Celebration of Life will be held at a later date. Jamie was passionate about giving blood regularly. As such, in lieu of flowers, or monetary donations, we kindly ask that you please consider donating blood in his honour.